Due to the Covid19 pandemic we are not training or playing matches and have had to cancel our annual tournament this year. But we hope to be back up and running as soon as possible.

Established in 1995, SAS Netball Club is based in St Albans. We are now one of the biggest clubs in Hertfordshire catering for a variety of ages and skills. We currently have five senior teams and nine junior teams playing in a number of regional, county and local indoor leagues on both weekdays and weekends. We train all year round on either Monday or Thursday nights. We are a friendly club with an active social calendar. 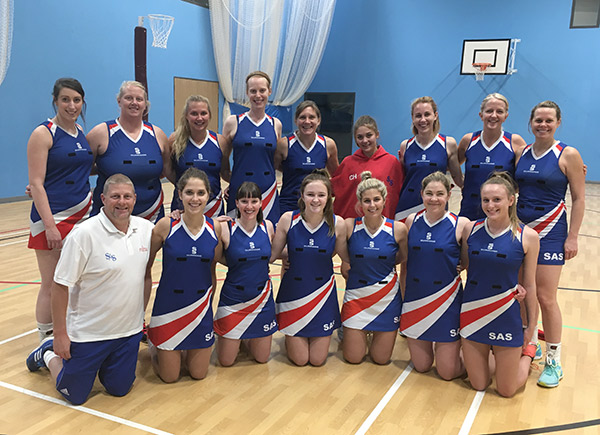 Brilliant to get Reds, Royals, Blues & Rubies back on court after 5 months in lockdown. 🙌

What a great opportunity for SAS Rubies Coach Dan. We can't wait until you are back at training putting us through our paces.
❤️💙

Over the last month and continuing for the rest of the season four Knights Men’s Netball players have joined Stars players in training at least twice a week as their new training associates.

Coach Melissa had this to say about the guys inclusion “Having the four Men join us from The Knights Men's Netball Club has been exciting. They are such amazing athletes that bring strength, dedication, respect and 'Man can they jump'. It makes our Severn Stars athletes adapt to the speed and unorthodox play and challenges us in a way that the female athlete does not. I love it and am also enjoying coaching the Men as well. We have welcomed the four men into the Severn Stars family with open arms. (as well as The Knights Men's Netball Club)”

We look forward to seeing what extra these guys can bring to our training sessions and we are proud to promote the growth of men’s netball in the UK. #weareSTARS ... See MoreSee Less

We know the Netball Family are itching to get back on court soon, however the Government are still debating the detail of the tier system for community sport, including travel details and possible tier related considerations.

We are working tirelessly to prepare for all scenarios so we can get you back on court as soon as possible. Thank you for your continued patience 🙌 ... See MoreSee Less

There are no upcoming events.